Window Units vs Central Air: Which Is Better for Your North Port Home? 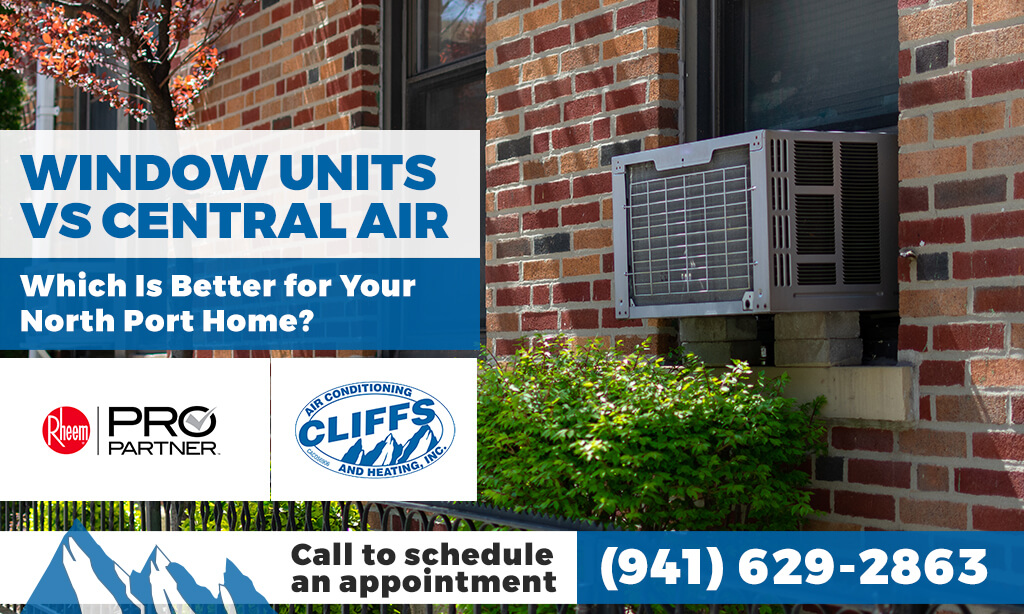 The thin line between comfortable and a muggy, balmy room is cost. You live in the 21st century, any room in the house can be any temperature you desire. At this point, you can have a room split temperatures if you want to shell out for the privilege.

Realistically, budgetary concerns happen, and finding a cost-effective, energy-efficient system is far more important. So it is that the debate on window units vs central air conditioning rages.

Both options get a room to a comfortable temperature. They both have their uses, but there are clear differences between the two technologies and the ultimate winner depends on two important factors: upfront cost and square footage.

Read on to learn everything you need to know about the costs associated with installation, upkeep, and annual operating costs of these two technologies.

for the most part, both a window unit and central air conditioning work on the same principles. Both use a refrigerant to force cool air and then push that air into a space.

Both require a constant source of fresh air to keep things moving and both have to work harder when the difference between the external and internal air is greater. Additionally, both are self-contained units that recycle air, water, and refrigerant with minimal losses.

Unlike swamp coolers (evaporative coolers) the external humidity doesn’t make a big difference to the efficiency of either unit. However, in areas with high winds and poor air quality, the filtration of the units will take a beating.

That covers the similarities, now for the divergence.

Window units pack a lot of cooling into a relatively small box. They tend to last for 3-4 years, depending on how often they run (seasonally will stretch out, year-round will take a toll), and they are portable.

If you are renting a space, sending a kid off to college, or dealing with a room that needs extra temperature control (guest room, pet spaces, home office) they are the go-to.

However, window units have some serious drawbacks, even before you look at their power to cooling ratio.

They aren’t easy or cost-effective to repair, meaning they are more often chucked then fixed. They also can’t be fully cleaned and filter upgraded without more headache than it’s worth.

For dealing with poor air quality or a household with allergy issues, a window unit falls down on the job.

Window units are nice and cheap to install. If your windows are vertical opening you basically pop open the window and jam it in.

You may have to pay a little extra for odd-sized windows or to shim up the gaps left by a horizontal opener.

The operating cost of a window unit is more expensive per square foot than a central air unit beyond roughly 400 square feet.

Below this threshold, the cost of installation and upkeep drop off the lifetime cost.

For a single room or relatively small joined rooms, the heat exchange is adequate to both cool the room and to remove humidity. If the window unit is too large, it will chill the air without having space to push out the humidity, leaving condensate and increasing damp and molds.

Also, remember to adjust the airflow direction to maximize efficiency in non-rectangular rooms.

Central air provides far more raw power than a window AC unit. This means that more square footage can be cooled at higher efficiency. Central air isn’t just about cooling, either. With heat pumps the same unit that cools in the summer can provide heat in the winter, keeping costs down on multiple systems.

Central air conditioners move a lot of air, this makes them excellent at pushing allergens out of rooms and out of the house. They need to be maintained to keep peak efficiency but the costs of maintenance average a lower cost over time.

Central air is also primed for convenient and rapid repair. This helps keep the lifecycle on a central air unit in the decade range.

Not a fan of ducts and vents blowing around, knocking, and causing noise? First, well-maintained ducts and units are far quieter, most noise comes from debris and deteriorating parts. Second, with split or ductless air conditioners, you get the same large-scale cooling benefits without the ducts.

Central air conditioning installation carries a sizable cost. For homes with ducts already built in this is reduced but still can run several thousand dollars.

For homes without ducts, installation goes up as much as 30% and takes weeks instead of days.

The cost of ductless units is higher but the installation cost itself is lower.

The day to day operating costs of central air conditioning is lower. The units pump through far more air at a lower cost per square foot.

They also cool whole rooms evenly, without the cold spots that accumulate closer to a window unit. Humidity control is much better with a central air unit as condensation and excess moisture are pushed out of the house instead of accumulating in the corners of the ceiling.

With multiple thermostat placements, different areas of a home can be kept at separate temperatures. Today’s thermostats can communicate with each other to adjust cooling across vents to reach optimal temperatures throughout a house and even across multiple stories.

Thermostat features also allow for remote tuning through smartphone apps. That means you can cool the house down as you come home from a trip or change up temperatures without getting out of bed.

There are certainly places where the battle between window units vs central air lands on the side of window units. For the most part, if you own a home or apartment of sufficient size, the central air units cost less overall and provide better air quality and cooling.

If you are looking for central air installation in the North Port area, contact us for an estimate today.

Ready to Get Started? Call Us